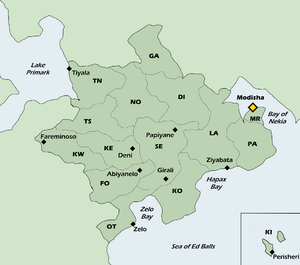 Yakolira was founded in 1974 by a group of settlers originating from Xobrania. Already inhabiting the island were indidgenous populations, however they quickly merged and in the present day are virtually indistinguishable. However, their difference can still be felt. Yakoliran, the native language spoken mainly in the regions of Tialani and Karilo, is an official language nation-wide and a minority of Xobranian speakers can be found in Koripaka (Lpsjqblb) where the first settlers from there landed.

Yakolira, however, got off to a rocky start. The disagreements between the settlers and the ethnic population grew so large that the nation we now know as Yakolira was split between the Kingdoms of Modisha (Npejtib in Xobranian), Tialani and Karilo. Large authoritarianism followed in all three kingdoms, and some minor conflict followed, notably in the battle of Desipet Field (Felide Desipet/Eftjqfu Gjfme) which took the lives of approximately 250 civilians.

Eventually, the Kingdoms decided to unite. Yolisid Akigola, honourary monarch under Tialani rule, met with the two other monarchs in Papian to discuss peace negotiations. Eventually, they decided to reunite under the name 'Traffia'. The early nation struggled, however Akigola introduced numerous revolutionary measures. He implemented a democratic socialist ideal which saw widespread equality, however their economy was still lacking. To combat that, he introduced potato farming on their many lush fields. This was such a success that the potato was adopted as a Traffian national symbol and was temporarily featured on the national flag. Akigola ruled for four terms, however decided to step down and let his deputy, Mikel Faroti, take charge.

Mikel Farosi was by far a different man, and he lead the nation into a brief period of war with Sosij over a land dispute and engaged in minor conflict elsewhere. This caused major casualities, and is generally looked upon with embarrasment in Yakolira today. It was so unsuccessful, in fact, that a snap election had to be called in 2006 barely 14 months into Faroti's reign. The Conservative leader Nigel Laparenosi took charge in the afternath, and although many feared for the worst, he was mostly unremarkable for his 4 years in charge.

Marnossian immigrant Aran Teloran was elected into power after the 2010 elections, which saw sweeping reforms to the entire country as Traffia transitioned into a liberal, progressive nation. He was seen as somewhat of a 'Traffian Obama' and he is generally seen to have made a positive impact on the nation. Under him, Traffia's economy switched to being more focused on information technology, as Yakolira today is one of the biggest hardware and software manufacterers in all of Zendari. Tourism also grew, as Tialani and Lake Primark became major tourist hotspots with their fascinating natural draw. However, many thought he wasn't as tough on business as Akigola, which in the 2018 elections lead to disaster for him.

Despite being a relative outsider, Nikola Marinesa rose through the ranks to be Traffia's first woman and Social Democrat Prime Minster. She is seen to be a return to the glory days of Akigola, and bring greater equality for all. One of her major goals is to completely end poverty in Yakolira by the end of her term, and she is making major progress towards that already. One other major change was the re-naming of the nation to Yakolira and the updating of the flag, both of which were greatly appreciated by the population. With approval raitings higer than any leader since Akigola, she looks set to bring prosperity to the nation again.

The Yakoliran language is derived from a mixture of English, German and Italian, with some French vocabulary also. It uses a rigid syllable structure, with a consonant-vowell-consanant-vowel in every single word. As a result, may foreign names have to be edited to fit into the language structure. As an example, Marnos becomes Maranosi in the native language. Due to the language previosuly being written in an abugida, there is no 'u' sound. However, the language nowadays is almost always written in the latin script.

The national sport of Yakolira is football, and their national team, despite not qualifying for the first ZFA World Cup, is still ranked in high regard. Their top division cotains 16 teams from across the country, and they help to nurture the upcoming generations of Yakoliran talent. Other popular sports include rugby, tennis, cricket and notably darts.

Public Transport is plentiful in Yakolira, with a vast high-speed rail network crossing the entire country being the desired method of commution for most citizens. Alternatively, a road network does span major cities, however is used far less rarely than the rail network and car ownership among especially young Yakolirans is incredibly low, with approximately only 12% of the population owning an automobile. 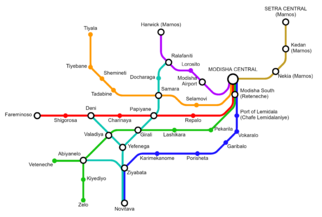 For air transportation, Yakolira has four major airports, all of which are served by the flag carrier airline YakolirAir as well as other airlines from across Zendari such as GoxuAir, Kydziyan Airlines and Air Pōuto. These airports are Modisha Yolisida Kigola International Aiport (MDS), Girali International Airport (GRL), and two airports serving Yakolira's most famous leisure destinations, Tiyala Lake Primark International Airport (TLP) and Perisheri Airport (PER) on the Kaborani Islands.