Wo Xi is a country in the Zendari world. It is bordered by it's only land border in the north-east of the country, Xaliqtyva and it shares a maritime border with Vasseau to the north, Nuevo Province in the east, and Xobrania in the south-east. It is Zendari's western-most country. The country, though large, is sparsely populated with just over of 1,100,000 inhabitants. The country is largely developed in the southern and northern regions, with large cities such as Ai and Ue known for pioneering influential green technology in Zendari. Wo Xi is a constituational monarchy ruled by queen Tei Shi and president Kenshi Yonezu.

The Kingdom of Wo Xi also includes the Kingdom of Sosij as an offshore independent autonomous state, receiving aid from Wo Xi proper despite still being ruled by monarch Mr. Blobby.

Wo Xi is the most heavily prosecuted country in Zendari.

Wo Xi currently stands as a monarchy, with the reigning monarch being Tei Shi since 1999.

The earliest traces of tribes found in northern Wo Xi date back to the year 300. The most prominent tribe in the region that held the most power in the area was found to be the Xi'i tribe, mostly situated on the northern coast of the peninsula. Some tribes were also found in the southern mountainous regions of the country with a few ancient settlements existing today - namely Oya and Yu. The country developed overtime with northern and southern tribes eventually coexisting to create many great works in the country.

During this period, many tribes had merged together, most being absorbed into the larger Xi'i tribe and adopting rituals from the tribesmen in the north. The area was heavily populated around the ancient cities of Ue and Ii. The area saw many great works including haikus (among other poetry), calligraphy, and painting. Many great works can still be found today in the Grand Xi Museum in Ue.

A period of harsh summer conditions led to the migration of many Xi'i and other tribesmen. The migration lasted 42 years with many camps being set up and eventually turned into modern day cultural hubs and relics of the past, such as the towns of Tso and Eso. Other tribesmen were situated too far north to migrate to the bottom of the peninsula, and decided to remain in more inland cities, such as Zuo and Ii, to avoid suffering from the tsunamis that continued to plough the northern coasts during scorching summers.

Eventually, migrating tribesmen situated in the southern-most point of the peninsula and established the city of Ai, Wo Xi's current capital city. The population eventually grew as the weather conditions were more suitable for the tribesmen, however technological advancements in the south were considerably lacking behind those in the north.

Following advancements in Ue and the north, the country had discovered an island chain north of the peninsula. The islands were empty however they were left with some previously inhabited houses presumed to be from Vasseaunian citizens with a few road signs being written in English, Vasque and French. The northern explorers eventually began to pick up on the English language. As they continued to travel north, they found the mainland of Vasseau and were capable of communicating with the Vasseaunian people. Trade agreements were established to benefit the city of Ue.

In the southern portion of the country, as the population grew, eventually the city of Ai was named the capital city alongside Ue. This eventually led to the establishment of two separate states: Wo (in the south) and Xi (in the north). Despite these names being used, they were not popular, with many people still refering to both sides of the peninsula as 'Ue Xi' and 'Ai Xi'.

The population of Wo found itself migrating north again, in search of arable land. The towns of Tso and Eso began to grow as Wo citizens settled there to sell crops and goods. Xi'i people living in the plains of northern Wo Xi were reunified with their brothers, however generations of interbreeding between the various tribes had left them very different to their tribemates. The states of Wo and Xi had decided to reunify under one name - Wo Xi. The country continued to have two capital cities: Ai and Ue.

Ai was declared the capital city as northerners migrated south in search for their long lost relatives. Ue faced a significant emigration problem and eventually it was decided that Ai was the superior city, with Ue remaining the economic hub for trade with Vasseau. To this day, Wo Xi has continued to develop economically and socially with culture from all over the country making its way to the main stage; especially it's music in the Zendari Song Contest.

On January 5, 2018, the Kingdom of Wo Xi and the Kingdom of Sosij signed a treaty allowing the island of Sosij to be protected under Wo Xi's military in exchange for reducing its sovereignty. The island continues to be self-governing and is treated as a semi-autonomous state, however it will continue to receive military and monetary aid from Wo Xi following the Sosi Economic Crisis of 2018. As a result of this, the population of Wo Xi has grown by 163, with all Sosi citizens gaining dual citizenship of the two countries. Sosij is welcome to back out of this agreement at any time, however it is currently a principality of the Kingdom of Wo Xi and is ultimately governed by the Wo Xi assembly in Ai. The king of Sosij, Mr Blobby, has stated his relief over the aid received from the agreement and hopes to continue many more years of prosperity between the two kingdoms.

On February 18, 2018, the monarchy and government came to an agreement to grant capital city status to Wo Xi's second largest city, Ue. The city is home to the government building and is where all laws are processed. Despite this, Ai continues to be recognised as Wo Xi's primary capital city, hosting the monarchy in the Shi Palace. Kenshi Yonezu, president of Wo Xi, and Tei Shi, queen of Wo Xi, came to an agreement at the end of 2017 to grant capital city status to Ue, however it was officially passed on the day and was announced via radio and television just a day prior.

Wo Xi is a coastal nation situated in the far west of Zendari. Currently the country shares a land border with Xaliqtyva to the north-east and a maritime border with Vasseau to the north. The majority of the population live on the Wo Xi peninsula which is situated between the western ocean and the Gulf of Wo Xi (formerly the Sea of Wo Xi). The country also occupies an island chain of three major islands north of the peninsula, largely responsible for trade with neighbouring Vasseau, as well as various islets around the northern islands and the southern-most point of the peninsula. 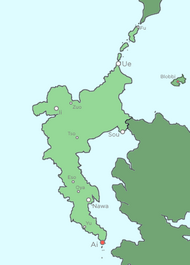 Wo Xi is a mostly mountainous country, with some of the highest summits being found in the southern stretch of the peninsula. A large area in the north of the peninsula, known as the plains, has been dubbed the agricultural hub for Wo Xi, sprouting many small settlements and home to many tribes. The eastern coast along the Gulf of Wo Xi is home to some of the most beautiful sandy beaches in Zendari, with many tourists visiting this side of the mountain range that divides the country in two parts along middle.

The islands chain north of Wo Xi is home to various dormant volcanoes suggesting potential volcanic activity in the region in the past. Archeologists take particular interest in these islands monitoring any possible future eruptions.

The Gulf of Wo Xi was formerly known to be a large ocean, however, due to global warming, the land between Wo Xi and the rest of the continent was drowned out by the rising sea levels. Scientists speculate that no villages were lost in this area as the region was largely uninhabited. As a result of the creation of the Gulf of Wo Xi, the country is limited to just one small land border in the north-west of the country.

The western ocean has eroded parts of the south-western coastline near Eso and Oya, however due to the high altitude of the nearby settlements, none of these are threatened.

Wo Xi is home to many species of llama and mountain goats are common in the southern reaches of the peninsula - no species in Wo Xi is under any substantial threat with conservation efforts being near non-existent as old tribes have generally led vegetarian diets throughout history. Deforestation is also non-existent with Wo Xi's lack of wooded area, the most heavily forested area being located in the southern reaches of the plains. Wo Xi is ranked among the greenest countries in Zendari.

The country is sparsely populated with a population slightly over 1,100,000. The majority of people in the country live in the southern end of the peninsula, with many tribes living in the rural nothern plains. Wo Xi's capital city, Ai, is the southern-most settlement in the country located on the southern extreme point on the mainland. It's second-largest city, Ue, is located in the northern-most part of the peninsula. Despite this, it is not the northern-most settlement. As a result of the two largest cities being located at extreme points, the central regions of Wo Xi are known to be some of the least developed and most rural in the continent. Even so, the northern and southern portions of the country benefit from high levels of development.

The rural parts of the country populated by tribes speak many various tribal tongues. All citizens are required to learn English, however Wo Xi'i people living in the north tend to speak Cantonese while southerners speak Mandarin. Nonetheless, citizens are able to communicate with eachother easily.

As of 5 January, 2018, Wo Xi has also taken control over the island of Sosij, a short way off the north-eastern coast of mainland Wo Xi.

Despite it's low population, the country has settlements in all parts of the country.

Wo Xi is divided into 12 counties and 1 autonomous country, Sosij. 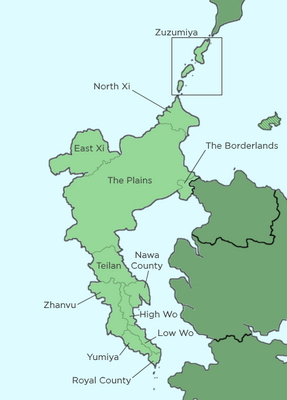