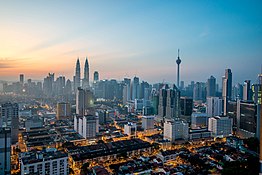 A typical city skyline in Vendujo

Vendujo gets its name from the Maltese words "Vendetta" and "Dubju" which mean "Vengeance doubts". It reflects on the times of Murphenzia, and how even though Vendujo used weapons to reclaim the country, the republic does not condone abuse or planned hatred towards one another, and would rather promote peace and prosperity.

Vendujo gained independence in 1896 from surrounding land and has since fluorished as a successful, happy place. Vendujo's capital and largest city, Cilmurph, is one of the most historical places in the Zendari world, with the outskirts of the main city being filled with ancient ruins dating back to around 1700 BC.

From 1224 up until 1895, the official name for Vendujo was "The High Land of Murphenzia" due to the dynasty of dictators that ruled over the land, dating back to 1330. On February 7th, 1896, An army of 300,000 men tramples the streets of the former capital, Leixlip, up to the current dictators palace, The Palace of Murphenzia. The soldiers slaughtered the dynasty of Murphenzia and declared the country a Republic. The dynasty is memorized in the current capital city, Cilmurph, in which you can see within the title.

On November 11th 1925, Vendese Miners went excavating a cave a few miles from the Scaveline Hanging Cliffs, and the Huantína River. They dug 250 feet below ground level and found thousands of tons of gold. Scaveline transported gold all around the country to help the growing nation thrive, which is the main reason behind Vendujo's contemporary building style.

Due to the extravagant rare findings from the Scavelinean, the rest of the country self-determined that there must be more gold beneath the grounds they walk on, so more miners were employed and continued scavenging for gold. On 18th July 1927, Vivånese miners discovered almost twice as much gold as was found in Scaveline.

Miners are still digging for gold to this day, but cities like Cilmurph, Kjeunik and Leixlip have banned excavation anywhere near the city grounds as they want to preserve both the modernity of their city grounds and their ruins of the city borders. Another reason is that it is believed there is only gold near the Southeastern ocean border, due to a failed Vendese heist way back in BC 283, when foreign thiefs sailed over and attempted to rob Vendujo, but dropped all gold they stole into the depths below.

During the winter of 1929, Scaveline were testing new weapons, that included a large missile, in which they were required to test into the ocean for health and safety purposes. The missile was accidentally set off 142 degrees off from its target destination, due to a slip up in construction. The missile hit a village between Cilmurph and Leixlip, killing over 1,000 civilians and injuring another 300.

The council of Cilmurph, Leixlip and Kjeunik saw this as a purposeful attack due to the weapons examination being private from the public eye. Vivånet defended Scaveline's apology stating how they knew the missiles were being tested and it was a faulty launch. The three western cities didn't believe them and put up a border between the jutting point on the Fokland border and the middle end of Chattahoochee in 1930, to separate the west and east of Vendujo. Cilmurph, Kjeunik and Leixlip became known as the "Ta Twerwir Triangolu" which roughly translated to "Terrifying Triangle". Qölia remained neutral from both sides.

The war officially began on January 17th 1931, when the Scavelinean council declared during the news on TEV that they would "take unmerciful action against those who wrongly accused us in 1929". 2,000 troops were sent to the border between the sides, where they were met with twice as many from the Twerwir Triangolu. Endless battles were fought out for the following 3 years, until Qölia decided to end the war by blowing up the wall and forcing each city's head of state to sign a peace treaty.

The Internet Age was the time period when the web became nationally accessible and free to use. New discoveries were made with the newfound technological devices. Many diseases that were thought to be inevitably fatal turned out to have easy solutions to cure. People began earning more money during these times. But there were also flaws. 9 in every 10 people were on numerous technological devices all the time, which used up power, money, time and took its toll on their health. On December 2nd 1947, a technology factory exploded due to several damages done to computers within after a severe snowstorm that lasted 16 days. 4,382 people were killed and over 5,000 injured and while usually most people could have survived the tragedy with just severe injuries, the extreme usage of technology for the past 8 years had reduced the populations nerve functions and immune system to a global low. Technology use gradually declined to a more moderated usage as time went on and in Spring 1950 it was at a regular speed and usage once again.

On May 10th 2018, due to overpopulation of the Zendari world, and government troubles, Vendujo were forced to sell off almost half of their land mass, which lead to a tremendous population decline of 35%, or 5,137,358. Major cities Scaveline and Vivånet were let go due to this and riots were held as many Vendese and former-Vendese were furious that their gold mines were being sold off. Anti-government officials tore down villages and burnt buildings in protest to the land reformation. Altogether, 310 people died because of these riots. A border was put up on May 18th to protect the country from attacks from the east side. It will be taken down when a new country forms in its place.

On July 25th 2018, A ban of Violían and Xobranian citizens, immigrants and tourists came into play after Violía allegedly ratted out several nations in music contest, Zendari Song Contest, for the sole purpose of gaining attention and undeserved credibility. This weak act for attention cost Wåri their place in the Zendari world, a country which Vendujo had some of their closest ties with. Government have seen this as a threat to the Vendese people's safety and have banned Violían people from entering or living in the country. Xobranian citizens had a ban enforced due to the Xobranian government officials voicing several hate speeches towards Vendujo as a country. All airport routes, cruise routes and cargo lines have been cut off from both nations to Vendujo and Vendujo refuse to recognize both countries as official Zendari nations.

On October 17th 2018, Vendujo was finally deleted from our lives and we all lived happily ever after.

Political views in Vendujo are very commonly shared, which is why there is no separate form of politics, everyone runs from different branches of the democratic party. Though politics aren't popular in the country, there are still political buildings used for debates, campaigns, voting and presidential history all around the country. Parliament is held in Kjeunik, rather than capital city Cilmurph due to it being a tranquil, clean and respectful area of the country. There must be a gender balance in parliament.

Vendujo elects a new president every 5 years. Presidents live like any regular citizen and don't receive special treatment, as in the Independence treaty, it states that "All children are born free and equal, and nothing throughout their life affects their stance on righteous moments and defends them from injustice."

Presidents of Vendujo alternate from male to female to promote political equality.

* Note 1 - No election was held due to the ongoing civil war, so Seniti was permitted stay in office for another 5 years.
* Note 2 - On January 3rd 2018, President Kowalski passed away due to lung failure. A snap election was held the following week, where Lara Xanthua was elected as Vendujo's 25th President.

Vendujo is located in the north of Orienda and is the seventh most eastern country in the Zendari world. It is separated from the former land of Yuvia by a small sea, which has a width of less than 10 miles at its narrowest point. To the south is Fokland and to the north is Chattahoochee.

Vendujo is a very green country and has a lot of shrubbery around it's country side, while the cities are filled with modernity. Vendujo has ruins that date back to 1700 BC and are considered national treasures and are protected at all times.

This is a list of sister cities to the six cities of Vendujo.