Mond Sabyar in the past was divided into two countries. Mond, being the 1st country was founded on the 30th of September 1765. It was a relatively small, mountanous country with little money, therefore it was a poor country. Sabyar was founded on the 16th of June 1793 next to Mond. The Sabyari, seeing as Mond was helpless and poor, started to help Mond by sending it food, money and all esential things, eventually the two countries decided to sign a treaty, and on the 8th of February 1823 joined together to form one country. After the treaty the Mondese part of the country became richer, with more landscapes, and Sabyar also benefited from the conjoinment as it had more tourists and it recieved more citizens. 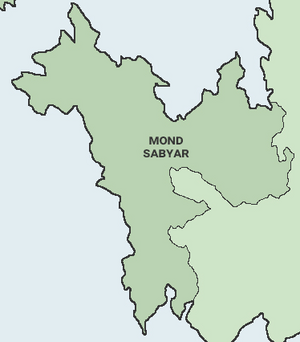 Mond Sabyar is located on the south of Orienda, so far not boarded by any country. The closest country to it being Junker. The country is divided into 6 regions: South Mond, North Mond, Sintrot, East Sabyar and West Sabyar. It's highest point, Mt. Iyumma (2,981 m) is located on the Eastern side of South Mond. It's lowest point, the Stokk Depression (-3,3 m) is located in West Sabvar, next to the border.

Tęskno - A Sabyari music project based in O-Starizi consisting of Hania Rani and Joanna Longić. They've so far released a debut album "Mi" released on 09.11.2018

- Frequent Domestic Abuse is punishable by up to 25 years in jail.

- Hunting is strictly forbidden in the country.

Mond Sabyar is a very linguistically diverse country, with 4 languages and their own dialects.

Sabondese - Is the national communicator. It's a distant relative of Semitic languages, written in the latin alphabet.

Sabyari - Is the official language of the Sabyar region. It's a relative of Germanic, with a lot of Dutch influence.

Mondese - Is the official language of the Mond region. It's a relative of the Romance languages. Sabondese has a lot of pronouncination rules. For instance:

"ħ" - is a breathier "h", easilly pronouncable by exhaling.

"ħħ" - is pronounced by sharply saying "ħ", pausing for a second and then repeating the "ħ"

"hh" - is pronounced deep from the throat. Much like the Israeli "h".

"j" - is pronounced like the "j" in the french word "Jaloux"

English: I had soup for dinner today.